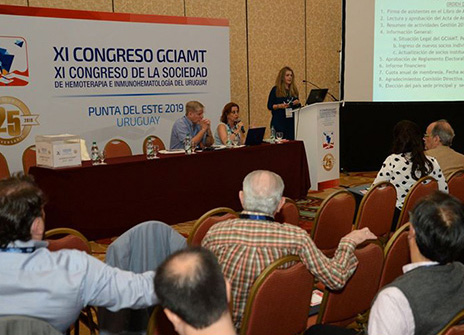 The GCIAMT's mission is to promote and favor the development of Transfusion Medicine for the benefit of the health, the well-being of the population and to link together Societies, Associations, Cooperative Groups, Institutions, Blood Banks, Hemotherapy Services, Transfusion, Centers Community collection of blood and components to Organizations that are involved in the recruitment of blood donors or blood components, processing, distribution, and transfusion, whether public or private, duly registered and authorized by the competent health authority; It should also bring together all Ibero-A professionals GCIAMT Objectives

The GCIAMT includes members who work in the public or private sectors. It is only required to be duly qualified for work in the specialty. It also accepts institutional members (scientific societies, hospitals, associations of promoters of blood donation)

We have more than 1000 individual members from all Latin American countries.

Participation in regional and local scientific and academic activities

1. Basic Training Course for Clinical Research (Annual, 15 participants from different countries) The students were specially selected among candidates with professional training that indicated their possibilities to develop future research in Transfusion Medicine. Why a limited number of learners? Because the course requires much dedication from teachers and potential tutoring of future student projects.

2. Annual course: Immunohematology 2021, The best practices based on the evidence with 250 ATTENDEES
The main objective of the IMMUNOHEMATOLIGY course is to provide an educational experience through practical, updated, and relevant information for transfusion medicine.
This kind of educational activity motivates participants to update and improve their work routines. Participating pushes the students to look for the best possible quality, which is redundant in the care of patients.


The course will be conducted through the GCIAMT virtual classroom. Leading professionals will give presentations on immunohematology. They are professors from the Americas Region and Spain. They designed the classes considering the local scientific framework and its transfer to daily practice. It is aimed at professionals in transfusion medicine with different levels of technical preparation and who are interested in experiencing learning based on real situations and

updated theoretical frameworks. Classes will be held once a month, from February to December 2021. The certificate will be awarded if they certify 80% attendance and a self-evaluation.

• The pre-transfusion routine. What are the necessary tests?
• Updated approach for solving ABO and RhD discrepancies
• Practical aspects and algorithm of AGH tests
• Immunohematology in the context of the quality management system
• GCIAMT project of rare phenotypes
• Implementation of a laboratory for techniques of molecular biology in immunohematology. The step by step
• Introduction to platelet immunohematology
• An overview of the 40 blood tests recognized by the ISBT
• Critical aspects of maternal-fetal neonatal immunohematology
• Clinical implications of the molecular biology of the Rh System
• Collaborative systems to improve laboratory practices of

In commemoration of World Blood Donor Day in 2020, the First Ibero-American Summit was held. The leaders of Latin American Scientific Associations and Societies participated, addressing the work for the benefit of voluntary donation, from each of the entities.

In the same spirit, in 2021, the Second Ibero-American Summit of World Donor Day was held. Community promoters of voluntary blood donation from countries in the region were identified and convened. The June 13, 2021, presentation was organized in 5 thematic axes, worked by different groups of promoters.

An entity of such academic relevance and positioning in Latin America, such as the GCIAMT, made visibly and legitimized the transcendent role of community promoters in the purpose of voluntary donation, amplifying their voices and showing that there are many initiatives with which the Blood Systems can work collaboratively based on the call for volunteer donors and the organization of blood collections.

The statistical data that show the impact of the Summit are the following:

3. Visibility in GCIAMT networks
The promoters spent five months in the preparation of each of the testimonies. During this process, the community promoters generated a network that transcended the Summit objective.
Their experiences were shared and exchanged among different Latin American countries, volunteers, and professionals. They recognized they could get linked thanks to the GCIAMT promoting their mission in their own countries.

The journey described above generated a fact that had never happened before in the region. It promoted or gave impulse to the consolidation of a Blood Donors Promotion Group at the Region Level.

The group was enthusiastic and eager to continue to bond and develop the strategies learned.

They understood they needed to share their knowledge and experiences and strengthen their respective countries' initiatives to reach 100% voluntary donation.

• Promote citizen participation through social volunteering with a focus on blood donation.
• Encourage and strengthen the work of civil society organizations in voluntary management.
• Promote networking of both volunteers and civil society organizations that work with social volunteering.
• Recognize the value of volunteering in contributing to the rebuilding of the social network.
• Generate a social commitment that leads us to build a more just and equitable society within a culture of solidarity.
• Educate the community on the importance of volunteering blood.